Spartan – A Vote of Confidence

Spartan – A Vote of Confidence 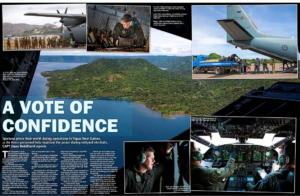 A VOTE OF CONFIDENCE – Spartans prove their worth during operations in Papua New Guinea, as Air Force personnel help maintain the peace during national elections, CAPT Jesse Robilliard reports THE integration of Air Force’s new battlefield airlift capability into the ADF continues to gather pace with the completion of the first operational deployment of the C-27J Spartan. Two aircraft from No. 35 Squadron at RAAF Base Richmond have completed their involvement in Operation Hannah, the ADF’s contribution to the whole-of-government effort to support national elections in Papua New Guinea. Deployed alongside the Spartan as part of JTG658 were a C-130J Hercules from No. 37 Squadron, two King Airs from No. 38 Squadron and five Army MRH-90s. FLTLT Oliver Kersnovski, of 35SQN, said Operation Hannah was an important test of the Spartan. “The C-27 brings a battlefield airlift capability, which means that we go to shorter strips than a larger aircraft like the C-130,” he said. “But we can take more over a further distance than the MRH90.” Alongside their Air Force and Army colleagues, members of 35SQN helped deliver 45,350kgs of election materials and supported the movement of about 200 PNG security personnel around the country. Operation Hannah’s election support mission was requested by the PNG government. JTG658 personnel and capabilities delivered a plan drawn up in conjunction with the PNG Electoral Commission and PNG Defence Force. FLTLT Kersnovski said the locals were very friendly. “They always come out to the airfield when they see an aircraft land and quite often, even though we’re not stopping for long, they like to take photos with our loadmasters,” he said. The Spartan crews worked at a brisk pace during the operation, with 35SQN members making the most of the opportunity to give pilots and loadmasters experience on the new platform. “PNG is a beautiful country,” FLTLT Kersnovski said. “We’ve seen some terrain that you just never see in Australia. It does have its challenges with a two engine aeroplane. It’s not as easy to fly around as Australia. “We’ve got mountains here that are twice the height of the highest mountain in Australia, which is keeping us on our toes, but it’s a great country to fly around and the terrain here is something that you don’t see anywhere else in the world.” The Spartan was introduced to the Air Force in mid-2015 and the service is building up to a fleet of 10 aircraft. “The Spartan is a great aeroplane to fly and we’re still early in the Spartan’s career in the RAAF,” FLTLT Kersnovski said. “It’s got a way to go in terms of development but down the track this is going to be an amazing aeroplane. Certainly here in PNG we’re proving we’re definitely a very valuable asset.”