On this day in 1999, members of 38SQN and 35SQN deployed to Dili, East Timor as part of INTERFET. A dozen technicians and an Army Ground Liaison Officer travelled from Darwin to Dili on a RAAF C130. Two Caribous were flown from Darwin to Dili the next day (10 Oct) and flying ops in the country commenced on 12 Oct.

In the month leading up to the deployment, Caribou flights from Darwin to East Timor had occurred. These supported SF operations and repatriated some East Timorese who had previously fled the country. None of these earlier Caribou flights remained overnight or refuelled in East Timor and crews were faced with the prospect of insufficient fuel to make land in the event of an engine failure for a period of the return journey.

Once deployed to East Timor, Caribou operations occurred as “86 Wing, Detachment C” and were initially based in Dili, living and working from tents next to the busy runway. The Detachment later moved to Bacau and increased in size to four aircraft. At Bacau most aircrew lived in a converted bathroom, while the technicians lived in a building that should have been condemned. The Detachment finally moved backed to Dili and living conditions improved when air conditioned ATCO huts were provided. All 35SQN personnel were transferred to 38SQN in 2000 and the last 38SQN Caribou left East Timor on 25 Feb 2001.

The Caribou proved ideal at operating in the mountainous tropical island nation, to rudimentary airfields, and achieved a high rate of mission success. At times the Caribou was the only link between Dili and the south of the island when rain cut roads, washed out beach landings and prevented helicopters from flying due to cloud cover across the high terrain. Tactical, fixed-wing transport again proved its worth, carrying out the unglamorous but vital tasks. 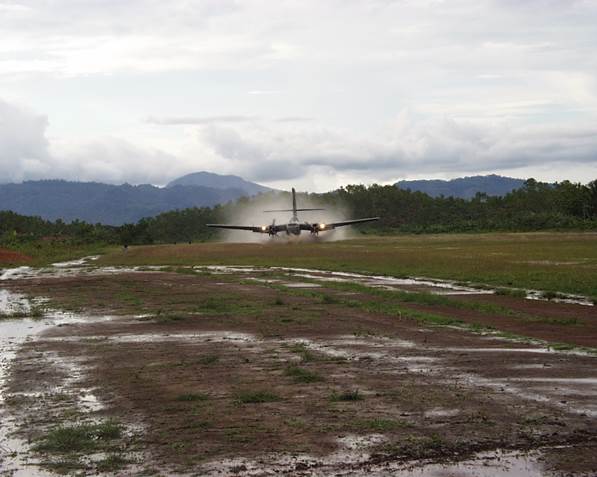